A nice and refreshing summer salad made of tomatoes, cucumbers and peppers and topped with white cheese: Shopska is probably the most famous Bulgarian salad. It is so easy to prepare and can be made in different variations, so you can enjoy it in almost any part of the Globe!

How was this salad invented

This is not an old traditional recipe, as many people might think. The Shopska Salad was invented in the 50s by chefs from “Balkantourist” - the Bulgarian state tour-operator of the time. It is not a coincidence that the colours of the salad resemble the national flag: this was made intentionally.

The salad soon became popular around the whole country since it was very simple and tasty and used very common regional ingredients.

Probably the only one ingredient of Shopska salad that might be uncommon outside of Bulgaria is sirene: a kind of salty white cheese. It is similar to feta cheese so you can use feta instead. Alternatively you could use grated cheddar or another cheese that you like or you may simply skip the cheese. Both alternatives will make the salad taste differently but will still keep its nice fresh taste.

Regarding the peppers, you can use fresh green peppers (like bell peppers) or baked red peppers which are very typical in Bulgaria. I personally prefer it with fresh ones as they are nice and crispy but if you like baked peppers, feel free to use them instead.

As for the onions, some people prefer it with red ones, others with white. There is no particular rule which kind is better for the salad, so choose the onions you like.

There are also different garnish variations. The most common one is just parsley but some people like to add also black olives. With them the salad becomes more similar to the Greek one so I believe they were not part of the original idea. Another typical garnish is a green spicy pepper on top. If you like spicy peppers, they would be a great addition to your salad.

In Bulgaria salad is normally served as a starter, typically accompanied by rakiya: a strong liquor made of grapes or other fruits. However I usually don’t follow the Bulgarian rules and normally have it as a side or as a light meal before a decadent slice of cake. No matter how you decide to have it, this salad will impress you with its freshness and taste: especially if you make it with nice seasonal produce.

Did you like this recipe? Let me know in the comments what you think about it. If you made it, please share how it was! 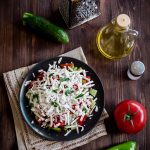 A nice and refreshing summer salad made of tomatoes, cucumbers and peppers and topped with cheese: Shopska is probably the most famous Bulgarian salad.
Prep Time15 mins
Course: Salad
Cuisine: Bulgarian 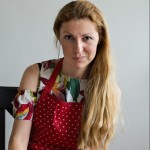